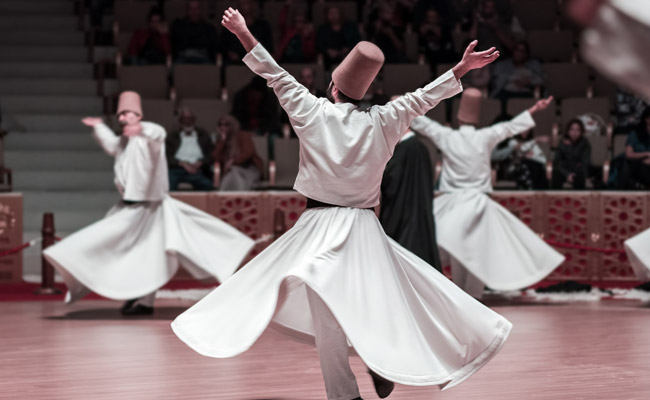 On the 747th anniversary of his death, Jalāl al-Dīn Rūmī, who with his tolerance showed the path of love to the whole world by embracing people no matter what religion, sect and race they come from, will be commemorated with “Seb-i Arus” ceremonies. Due to global pandemic, the first ceremony took place on December 7 in Konya where Rûmî spent majority of his life. The second ceremony will take place with no participation again, on December 17.

The Sufi poet, Muhammad Jalāl al-Dīn Rūmī known to the world as Rûmî, who lived in the 13th century, is considered one of the world’s greatest Sufi philosophers and he was loved and respected by all religions for his poems and religious writings that embrace all humanity. Rûmî had many attributes such as a Muslim poet, jurist, Islamic scholar, theologian, and Sufi mystic, but he was much more than that. He represented a life order in itself and believed in the “true essence”. He said the rest was nothing but an image.

Rûmî, whose door was open to everyone, no matter what race or religion, has become a symbol of equality in the world in every sense. Every year, visitors from all over the world who believe in Rûmî’s philosophy participate in the ceremonies held in Konya to commemorate and celebrate Rûmî Jalāl al-Dīn Rūmī, who spread this loving, humanistic view to all of humanity.

With its history dating back to 7000 BC, Konya, one of the major cities in Central Anatolia Region of Türkiye, has become “the cradle of civilizations and religions” having been home to numerous civilizations. The city is known not only for Rûmî, but also for its rich culture that blends all this historical heritage.

Jalāl al-Dīn Rūmī has been commemorated on his death anniversary at Seb-i Arus (Night of Reunion with the Divine) with commemoration ceremonies every year in Konya since 1937. Seb-i Aruz ceremonies will be held this year for the 83rd time with the support of the T.R. Ministry of Culture and Tourism. This year will mark the 747th death anniversary of the world-renowned Sufi mystic, poet and scholar. Due to global pandemic, this year Seb-i Arus ceremonies are being held with no participation, the first one already held on December 7 and the second to be held on December 17. The ceremonies will be live streamed on digital platforms and several television channels.

The Story of Shams-i Tabrizi and Rumi

Sufi mystic, poet, and scholar Jalāl al-Dīn Rūmī’s teachings widely influenced mystical thought and literature throughout the world. Stories tell that Rumi, who was always a beloved figure in the Islam world became immensely sad after the departure of his master Shams-i Tabrizi (Shams of Tabriz) with whom he had discovered the depths of spirituality. This loss caused a great change in his inner world. He gave up everything and wrote “Masnavi” which is widely recognized as the greatest Sufi poem ever written, consisting of 25 thousand couplets. For Rumi, true love meant love for Allah (God), and death was the day when he would unite with the divine, Allah. That is why the anniversary of his death, which is December 17, is known not as a day of mourning but as a day of celebration, and the Seb-i Arus ceremonies, which are held every year on December 17, also mean ‘The Night of Reunion or Wedding Night’.

What does Seb-i Arus mean?

Seb-i Arus means ‘wedding night’ in Türkiye. The wedding night is known in the Mevlevi order as the night Jalāl al-Dīn Rūmī died. Since Jalāl al-Dīn Rūmī considered his death not as an end but as a reunion with his beloved, God, his death anniversary is called the “Wedding Night”. Rumi interprets death as a return to one’s origin, a “return to Allah” due to the fact that its source is a divine ore; according to him death is not the disappearance of the body, but the journey towards Allah. The commemoration ceremonies, also called as Reunion Anniversary International Commemoration Ceremonies known as “Seb-i Arus” among people are held in the week of December 17 which is the anniversary of Rumi’s death. In 2007 UNESCO had declared 2007, Rumi’s 800th birthday, as the “International Rumi Year”.

Rumi describes his life with a simple sentence: “I was raw, I became cooked, I was burnt.” His real name is Muhammed Celâleddin. He was later given the names Rûmî- scholar- and Rumi. He was born on September 30, 1207 in the city of Balkh, in present-day Afghanistan. His family left Balkh in 1212 and went to Mecca for Haj passing through Baghdad, Nishapur and Kufe. Later, travelling through Damascus and Aleppo, the family settled in Karaman (Larende) in 1222. Rumi’s father was an important theologian, jurist, and mystic. In 1228, he became the head of madrasa (religious school) by the invitation of Ala ud-Din Keyqobad, ruler of Anatolian Seljuk State and the family moved from Karaman to Konya, the capital city of Seljuk State.  After his father’s death, Rumi took over his father’s role as an Islamic teacher and gave lectures and sermons for many years. From time to time, members of different religions also participated in his lectures and conversations. Rûmî Jalāl al-Dīn Rūmī, died in Konya at the age of 66, on December 17, 1273. Rumi’s body was interred beside that of his father, and a splendid shrine, the Yeşil Türbe (Kubbe-i Hadra- The Green Mausoleum) was erected over his place of burial. Attached to mausoleum of Rumi, the former dervish seminary now serves as a museum- Rûmî Museum- housing manuscripts of Rumi’s works and various artifacts related to the mysticism of the sect. Upon his death, his followers founded the Mevlevi Order, also known as the Order of the Whirling Dervishes, famous for the Sufi dance known as the Sema ceremony. Rumi’s writings are considered to be a pinnacle of mystical art that transcends religious, cultural and ethnic boundaries.

The Legacy of Rumi

Located in the Mediterranean and connecting Asia and Europe continents that are separated by the famous Bosphorus, Türkiye is a unique destination that welcomed more than 50 million tourists last year. The country that has always been a hub for cultural interaction and home to varying climates inspires the visitors today with its history, nature, and gastronomy that reflect the diversity of civilizations for centuries. Located at the crossroads of cultures, Türkiye has a distinctive understanding of art & fashion which is the synthesis of tradition and modernity and its extremely dynamic shopping & entertainment life also attracts visitors from all over the world. Türkiye implemented “Safe Tourism Program” for the 2020 tourism season. The program that has been rapidly adopted by the key players in the industry,  defines a series of measures that must be taken across a vast range of related bodies including food & beverage, transportation and accommodation establishments to ensure the health and well-being of facility personnel and guests, both local and foreign.